"Melting Pot " is an India to Europe exhibition tour of paintings by four women artists of different nationalities, all working in India. The project is initiated by two artists with their practice in Bangalore; a Serbian artist Katarina Rasic, and Barbara Ash from the U.K. Last year they had the idea to form a working artist collective, and use their "international links", to connect artists and shows in India, where they currently work, with their home countries. Gayatri Gamuz, a Spanish artist based in Thiruvannamalai, Tamil Nadu, and Pritam Bhatty, an Indian artist from Mukteshwar, Uttarakhand, were both invited to participate owing to the links and commonalities in their work.

The Melting pot venues so far:

"The ‘Melting pot’ conjures up an image of diverse elements poetically mingling and merging together, with bits and pieces of resistance preventing complete homogenisation of the mixture. The compilation of work symbolically carries forward the theme; individually, and jointly, the four artists’ paintings represent notions of absorbing, adopting and alternately rejecting cultural influences that have framed their respective life experiences. The exhibition marks similarities and differences in their perspectives, while highlighting the hybrid nature of their practices. The imagery is visibly transnational, tracing lineages, exploring roots, and morphing disparate histories through visual narrative. References to stereotypes, and significant engagement with the self and the other in varied environments, feature as central motifs, as do nuanced allusions to India as a nation. Barbara Ash, Pritam Bhatty, Katarina Rasic and Gayatri Gamuz navigate physical and conceptual boundaries, attempting to embrace the past while building bridges into the contemporary."

"A cultural connection colours the mind and heart. For Katarina Rasic the essences of her domicile, Serbia, and influences of her temporary home, India, come together as she portrays her transforming self as a symbol of flux and change. Her body, her skin becomes the site to map her journey between cultures. Rasic exploits the language of repetition, providing straightforward and partially abstracted templates upon which to build complexity. There are oblique references to desire, domination, femininity and innocence interspersed in the imagery; the use of gold leaf brings in alternation, a projection of high sophistication and popular culture. The child form emerges as a metaphor for possession and loss." 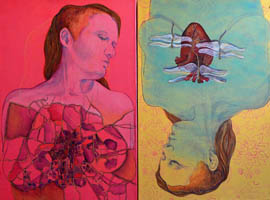 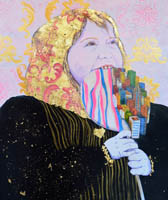 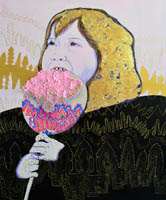 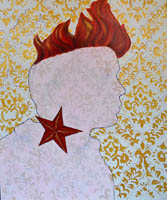 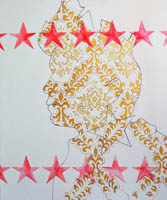